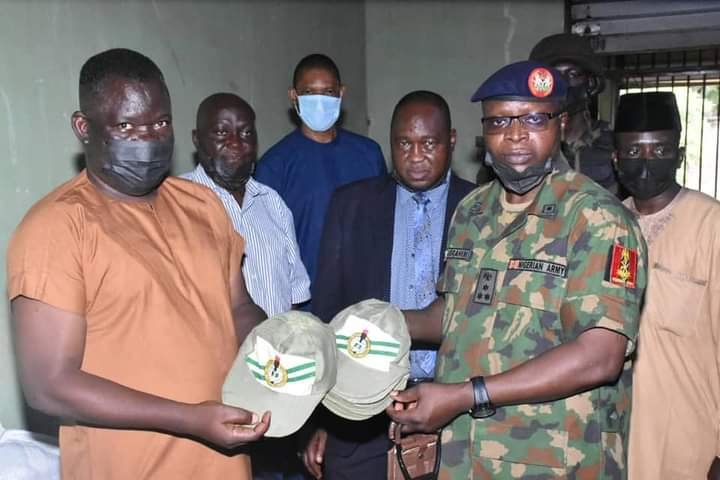 The Director-General Brigadier General Shuaibu Ibrahim has paid an unscheduled visit to the NYSC Garment Factory at Mgbaku, Anambra State.

Conducting the Director-General round, the Factory Manager Mr Joshua Onifade briefed him about the measures taken by the Management towards optimising its operations, including the provision of thirty-six new industrial sewing machines.

He said that the factory had refurbished ten old industrial sewing machines, thereby increasing the number of functional ones to forty-six.

He thanked the Director-General for the provision of a 20KVA sound proof generator to power the equipment, adding that through his own initiative, the factory has been connected to the National grid.

The Manager further stated that with the steps taken by the Director-General to re-energize the factory, it now makes daily production of two hundred and twenty-three sets of kits comprising khaki suit, P. E.

shorts and plain vests, adding that he was determined to double the output.

The Manager disclosed that about thirty Corps Members are engaged for sewing, adding that in a bid to maximise

opportunities for the Corps Members, a Skill Acquisition Centre had been established within the facility.

According to him, the host community also benefits as not less than fifty women are engaged for botton tackling.

In his remarks, the Director-General, Brigadier General Shuaibu Ibrahim expressed satisfaction with the progress made in the factory.

Ibrahim particularly commended Onifade for his managerial acumen, and urged him and the rest of the workforce to sustain their level of commitment.

He said Management would continue to support the growth of the factory in line with his policy on reinvigoration of the NYSC Ventures.

How to Apply for NYSC Correction of Name, Rearrangement

How to Apply for NYSC Correction of Name, Rearrangement

Do well to air your views and suggestions on the development. Don’t forget to join our WhatsApp group and Facebook page.