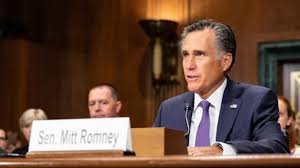 US Senator Mitt Romney has been booed by Republicans at a convention in Utah. The Utah senator and former presidential candidate was the only Republican to vote twice to impeach ex-President Donald Trump.

Mr Romney added that he was “a person who says what he thinks, and I don’t hide the fact that I wasn’t a fan of our last president’s character issues”.

moderate Republican, Mr Romney is not facing re-election to the Senate in 2022.

This incident is seen as an example of how, despite his election loss last year, Mr Trump continues to be popular within the party.

A CNN poll released this week suggested 70% of Republicans still believe Mr Trump’s allegations that President Joe Biden did not legitimately win the election – despite the claims being repeatedly proven to be false.

He started to say “and I’m also no fan…”, but then had to stop speaking again because of the volume of the booing.

Do well to make good use of the comments box below to ask questions as required. Ensure you rate this update and subscribe to our YouTube Channels.